The start of a new big project! After the Overwatch talks from Blizzcon I got super hyped and decided to create a new environment. In one of the slides from a talk that Jeff Kaplan and Arnold Tsang made I saw a concept image for a map located in the Amazon. Being Colombian, I felt I needed to make my own version of that map.

The idea of this project is to be as true as possible to the Overwatch art style and techniques, and based on the feedback  I got from my portfolio reviews, practice my hand painted skills. I have been working on it from time to time the last 3 weeks! And of course, everything you are about to see will probably change as I move forward.

To be able to work on it as a class project, I had to stick to the rules which basically were: Make a Cafe.  Hmmmm…. a Cafe…. Kofi Aromo maybe? Maybe a Spawn point for a team on defense?

The massive increase in omnic production in the 2030s had a devastating impact on the air quality all around the planet. The construction of new omniums, as well as the obsession of different nations with robotic based military forces caused CO2 levels to go off the charts during two decades, causing an accelerated environmental decline rate never seen before. After the Omnic crisis, a team of scientists affiliated with Overwatch embarked on a mission to research the few still untouched rainforests on Earth, with the objective of finding a way to decrease the CO2 in the air, and stop this environmental tragedy.

Since then, the Amazon Rainforest became the home of a group of scientists that work every day to improve the relationship between humans, Omnics and the environment,, as well as educate all the tourists that go on vacations to the famous natural parks that are located around that zone.

The map takes place in 2077 in Amacayacu, one of the most popular natural reserves in the Amazon, and the closest to the Overwatch scientific facilities. In the current scene we are shown a cafe (unsurprisingly, from the gigantic African franchise Kofi Aromo) from the reserve at the riverside of the Amazon river. Paying close attention, you will be able to notice certain objects that give us a hint on who was there, and what was he/she/they doing there. Different Amazonian native tribes were protected since the early 2000s, making the buildings preserve characteristics of their original architecture, as well as some modern additions in order to make the tourists have a more pleasant visit.

Don’t make fun of my sketches! What you are about to see is kind of… well, they are drawings simple enough for me to get an idea of what I am going to make, and try to find some shapes to make the props. I take some hints from Overwatch itself, and also try to recreate some of the props that are already designed for the game.

Just to be clear, some designs are not mine, like the Espresso Machine, or the computers and tablets. Despite that, all the models and textures I will use in this project, will be created from scratch by me.

I start by creating a BlockOut in Maya or Unreal Engine. The most important things to me at this point is to establish scale, proportions and also determine what objects will be able to be reused. For example, at this point, I want to reuse as many columns, planks and floor modules as possible. 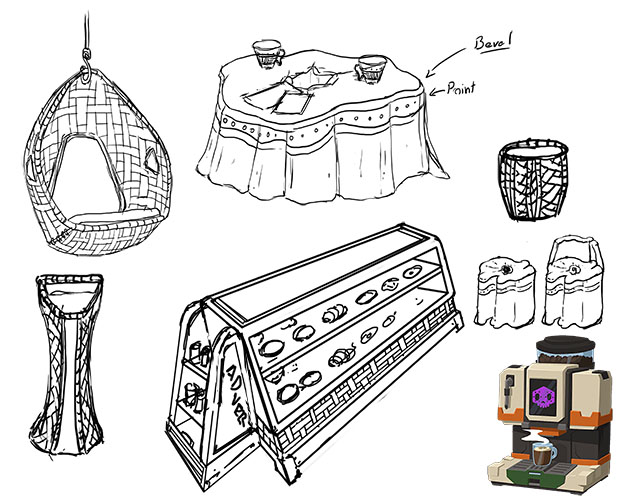 For the props, I was thinking about wood and wicker. Given that the traditional native Amazonian tribes created their buildings using these materials, I decided to expand on that to make them part of this sophisticated futuristic cafe.

Amacayacu is supposed to mean River of Hammocks (Rio de Hamacas) (maybe not my best translation). That means there are supposed to be hammocks everywhere. Being realistic, getting cloth to look convincing, and interact well with the players in game is pretty complicated. Though there is cloth in Overwatch, I have noticed that they try avoid using it if there is going to be a dynamic or simulated interaction with the player. In this case, I will place the hammocs on the walls as an ornament (similar to the banners and ribbons from Dorado), and replace hammocks with hanging chairs to still make an allusion to the name Amacayacu.

After that… well… if we are in the Amazon… there is a lot of foliage. This will be super tricky, given that foliage in overwatch is pretty minimal. I guess is to get a better performance and keep the clean look for a better gameplay. This will probably be one of the latest stages I will work on.

The following are a couple references some friends sent me.  I found a couple more googling, but not gonna post them here! still, It’s important to look for references!! 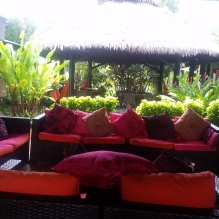 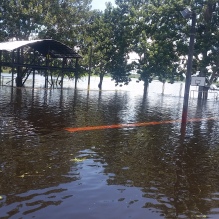 For the textures I wanted to follow the Technique from Thiego Kafkle’s tutorial: using trim sheets.

Overwatch style is super minimalistic, but still rich of detail and descriptive materials and textures. I’m still trying to get that feeling.

So far, this is what I have made for all the environment textures: (They are still Work in progress! Foliage is super detailed.)

I want to keep the models as low-poly as possible, try to get as close as possible to Overwatch’s poly-count, which is… no idea. But I can still try to match it by studying their models in-game.

The most importat thing to me right now is the floor. Instead of making a tileable texture for planes, I created a floor made by individual planks. I made this because I wanted players to be able to see through and see the water below. Also, get some detail from  different height of the planks.

This is a modular piece that I duplicated a couple times to create the floor.

And to finish this update, I’ll leave you with some gifs of what I have made so far these past 3 weeks. I’ve been all around trying stuff, placing taking, moving, deleting, adjusting, etc.

It’ll take me some time to finish it! But, there is no rush, I want it to be really cool and pretty looking! I want to learn to make different stuff in Unreal, and really achieve that Overwatch look. I’ll keep updating my progress on this map, so… keep an eye on my blog! 🙂